Filmed in 1975 by Jesus Franco

Somewhere in sunny Puerto Rico: private detective Al Pereira has seen far better days in his professional life. He would need more jobs, because his cash is almost empty. One day he meets the obscure, mysterious Cynthia, who promises a lucrative job. Pereira is supposed to oversee a notorious businessman and politician named Ramos, as Cynthia assumes that he is cheating on her, and Pereira is said to shoot proof-footage of strangers. An easy job, as Pereira seems, and he gets to work. But the lady who gave him the job seems to play a double game and pulls him into a murderous affair. In any case, Pereira one day finds Ramos dead and now has the police on his neck, which suspected him of killing the politician. Apparently, Pereira was the last person to have seen Ramos alive, because he snapped the foreigner in a unique position during the lovemaking and then sneaked out of his house. To prove his innocence, Pereira goes with the investigating Police Inspector to the widow of Ramos, to be confirmed by her that she was the client. But Cynthia does not even think to relieve Pereira, because the widow is someone completely different: In front of the two men is the Pereira completely unknown Olga Ramos, which nevertheless relieves the private snoop. Pereira can not make sense of history, because one day he meets client Cynthia again. She works as a striptease dancer and starts to spit her spider web over Pereira. Soon he falls for the dark siren, but what game drives the real widow? In Puerto Rico, a down-on-his-luck private detective is hired by a woman to take compromising photos of her husband, a notorioous nightclub owner. After he finishes the job, he finds himself hauled in by the police, who inform him that the nightclub owner has been murdered--and that he is the prime suspect. 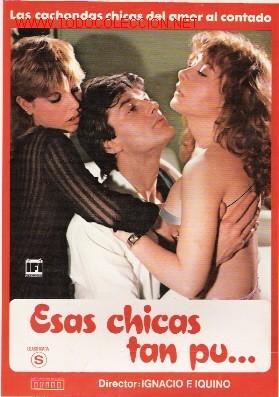 Dalia and Rita are two young people who work selling their bodies. Dalia is in love with Monica, and one of her friends is Chumi, who is married to a pimp.

Maria, 16 years old, is forced to enter the convent of Serra D'Aires, which is secretly run by Satanists.

A beautiful young peasant girl gets tired of farm life and her handsome, boring boyfriend.

Zeb finds a doll and a ring in a garbage can. Then he sees Ann going to work with her friend Babs.

The randy adventures and misadventures of a group of out-of-towners attending a trade show in Berlin.

Cheerleading squads traveling on a bus to a state competition are kidnapped for ransom by former football players.

A team of geologists attempt to remove a native cannibal population from an island to perform atomic research, but the cannibals' female leader disposes of them one by one by seduction.